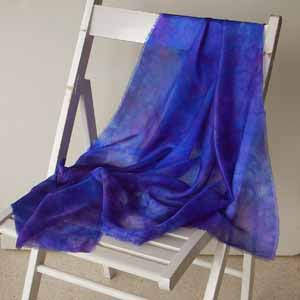 Back in the 90s a work friend and I used to try out evening classes teaching various crafts, and one of them was silk painting. I became quite obsessed with it. So obsessed, I bought a 50 metre roll of silk and made my own stretcher.

Eventually I got to the point where I, and my friends, family, workmates, people I passed on the street had all received scarves for christmas and birthdays and whatever other excuse I could come up with. I tried selling the scarves, which was my first and only demoralising experience at holding a stall in a craft market. I really hated the hemming. (Pre-hemmed scarves only came out toward the end of my obsession.) Eventually I couldn’t afford to have anything professionally steam fixed, and couldn’t find a method to do it at home that didn’t affect the dye, and I just gave up.

But last week, having dragged a few more boxes from my old house to this one and doing the usual examination and cull, I found the silk painting supplies and reconsidered. I needed a purple project, and there was a method I’d stumbled on toward the end of my silk painting obsession that might be worth trying again.

It’s so simple it felt a little like cheating, but I didn’t care because it’s actually a lot of fun. The method involves laying out plastic, placing the silk loosely scrunched on top, dropping dye onto it until it’s mostly covered, and squeezing it with your hands to help spread and mix the colours. (I recommend using gloves. I know, it should be obvious, but I didn’t and had purple hands for the next 24 hours.)

None of this tracing lines with gutta and carefully painting the dye inside so it mixes just so. That all seems so fussy now.

Next came the steaming. You’re supposed to lie the scarf flat on paper, roll it up so no silk is in contact with silk, and carefully steam it in a way that avoids condensation dripping onto the package.

Pah! Forget that. I just scrunched the scarf up again, put it between two sheets of paper towel and tied it up loosely with string. Into the steamer for 40 minutes then a quick wash to get rid of any excess dye.

The result is an appealing subtle texture that had the beau wondering out loud if I could make him some photography backdrops. 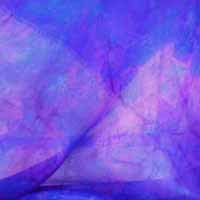 I pulled out 5mm worth of threads all around to make a fringed edge and it was done. It was surprisingly painless, and I’m thinking of making more.

One thought on “Project Spectrum Purple”