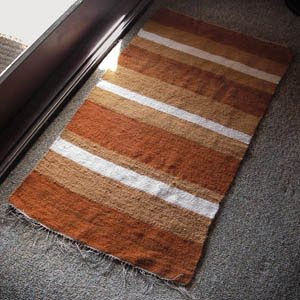 Weft: eucalyptus-dyed handspun
Warp: 16/2 linen
Weave: plain ol’ tabby
Finishing: 10 shots of warp linen as a border, then I knotted the fringe. After washing and drying I brushed the surface with a pet brush and it helped create a softer feeling surface under the feet – especially needed for the orange weft.
Comments: I suspect the linen is too wussy for rug warp. It did okay, aside from one warp thread breaking, matched up with the handspun, but it’s clear rag rugs are going to need the recommended 8/4 cotton carpet warp. Unfortunately I’ve not found an online shop based in Australia that sell it.
I should have woven a sampler, as it would have shown me that the orange yarn was a bit thinner. I could have combat this by doubling it.
Summing up: I like it. It may be simple and rustic, but it suits the purpose it was meant for.