Last week a friend emailed to ask if I could mend an old crochet blanket her aunt had made 40-50 years ago. I told her to bring it over, and we spread it over a table and examined it closely.

It’s a classic granny square blanket made of scraps, and had started to unravel in the middle of three squares. I was pretty sure I could fix it, and decided to photograph the process in case I was right, so if anybody else needs to do the same I can send them here for a ‘tutorial’. 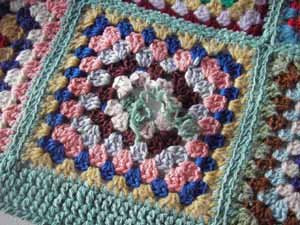 The first thing I did was put in a ‘safety line’ to stop more unravelling, through the base stitches of the round outside the ones that had unravelled. 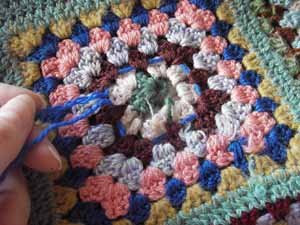 Then I hunted through the stash and matched as many yarns as I could. There were three I couldn’t match, so I headed up to the local op shops and soon had three little balls of similar yarn. Now I just had to work out how to replace the unravelled sections.

After the existing yarn had been removed, I put the replacement yarn on the wool needle and threaded it through where the safey line was, going the opposite way to how you crochet. Then I removed the safety line. 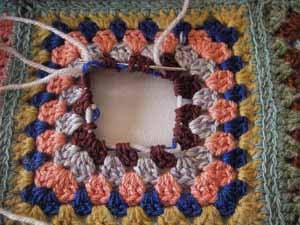 Next I made the missing centre round and joined the end of the yarn for the round that would join it to the blanket. I made enough chain stitches for one stitch and one for the gap between it and the next cluster. 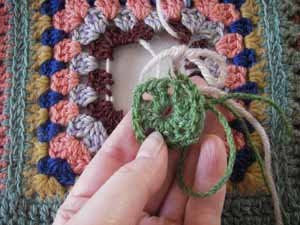 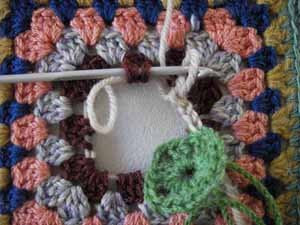 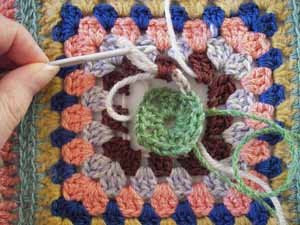 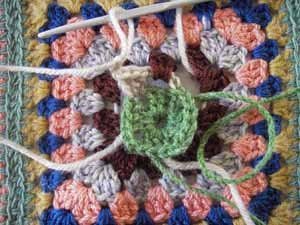 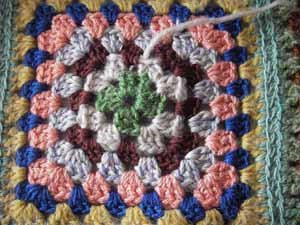 Then finished off by cutting off the yarn, threading it through the working loop, pulling tight and then sewing in the ends.

The rug is now fixed, washed in woolmix and drying on top of blocking squares on the floor of my workroom. I worked out while fixing the rug that it was coming apart because the crocheter had attached new yarn by tying a knot and then trimming the ends to about half an inch before tucking them into a cluster. Those knots are working their way loose, but still, it took 40-50 years for them to do so. Which is pretty remarkable.

I think this rug will now be put on display rather than used. From the sounds of it, my friend didn’t realise how much she valued it until she realised it was coming apart. Perhaps that’s how heirlooms come about. They’re made to be used, but in time they accumulate a sentimental meaning, partly through long familiarity, partly because the maker passes away and the object is a manifestation of their time and love that remains. I bet the woman who made this hoped it would be useful, and didn’t imagine it would still exist so many years later, or that it would become so much more than just a blanket made of scraps.

4 thoughts on “Mending a Friend’s Granny”