On Friday I finished this: 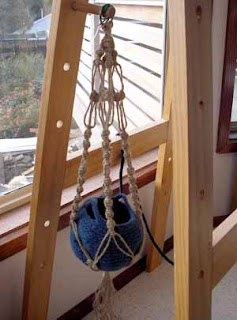 Hmm. I’m going to have to find a good place to photograph my pot hangers.

This design was easy enough. It’s called “Mini” (and no, I didn’t choose it because of the car reference) and was one of two small scale beginner projects. To answer Peeve, there are no shiny wooden beads in this one, because I’m saving the few that I have for a more advanced project. I suspect they were salvaged from my old pot hanger.

It’s wierd, isn’t it, how something can be forgotten and unmentioned for years, then suddenly there are references to it everywhere. If I take the purchase of some yute as a starting date, then I’ve had the itch to do a bit of macrame since early in the year. Then Wendy of Knit and Tonic mentioned it a few months back. Then in the latest issue of Inside Out, which I read just after I finished the pot holder, one of articles had the writer wondering how long it would be before she could bring out the macrame wall hanging she’d kept for years.

Macrame’s back, I tell you. Soon they’ll be selling it in Bunnings and Harvey Norman. Just you watch.

I finished re-heeling my Dad’s socks: 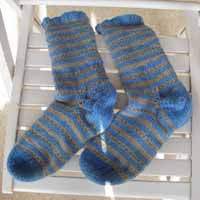 There was no knitting over the weekend. We went from a christening to a child’s birthday party to the airport to a friend’s 42nd birthday party in Adelaide to another friend’s house for the remaining hours of the morning, to some beachy suburb for lunch to the airport and home again. It was fun but exhausting.

It seems to be the year of the crazy too-quick interstate visit for us.

The party theme was Hitchhikers Guide to the Galaxy. This was part of my costume: 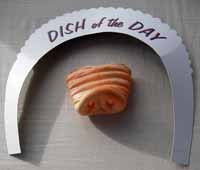 No photos of me modelling it, because the rest of the costume… well, it involved the most disgusting fleshy pink trakkie dacks and top in existance. (Weren’t hard to find – we just asked ourself where the most skanky clothes in the eastern suburbs were likely to be, and headed to Dimmeys at Ringwood Market. Five minutes and $11 later I had exactly what the costume needed.)

One thought on “The Old is New Again”